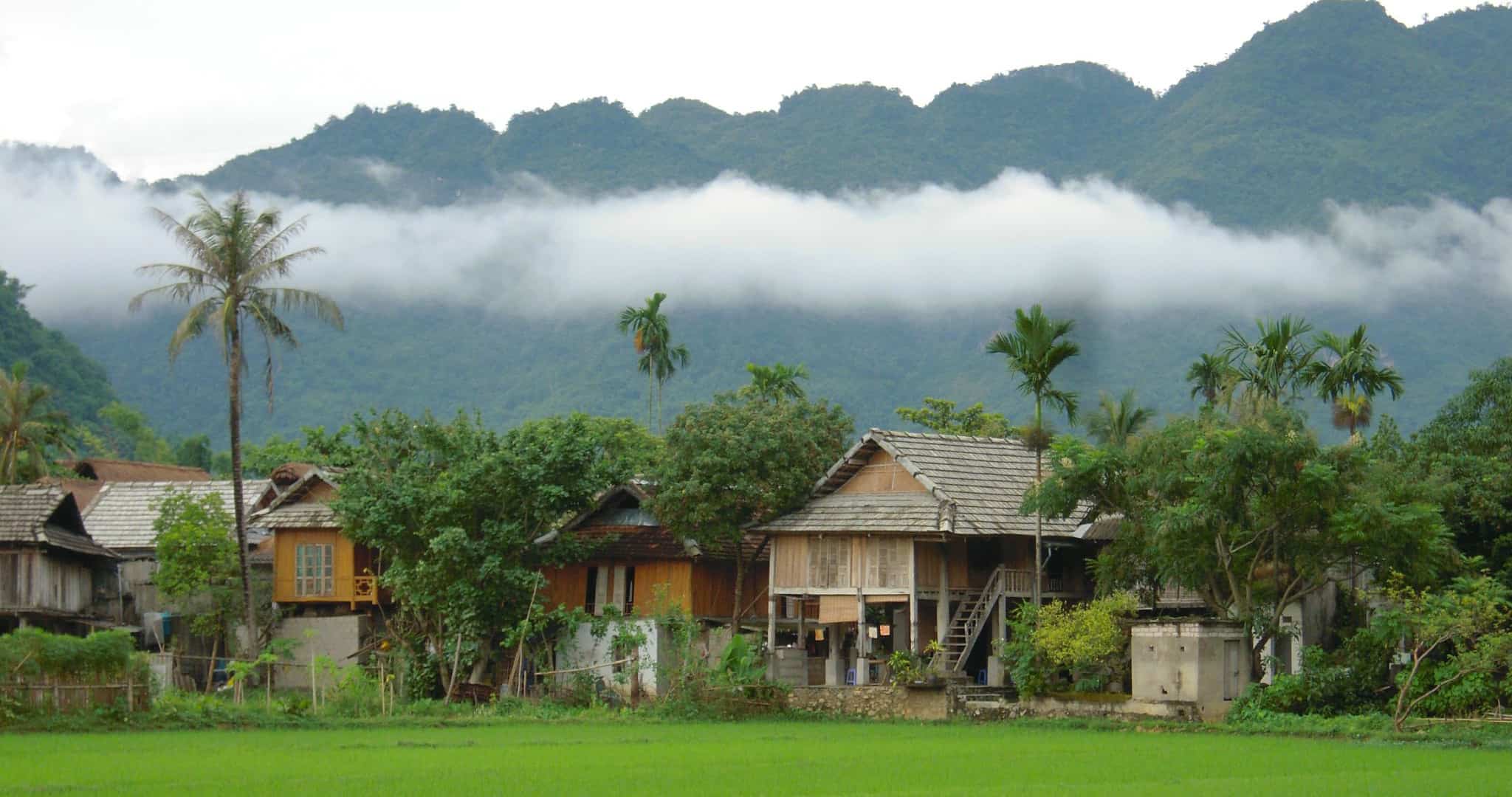 The Socialist Republic of Vietnam is located on the eastern edge of the Indochina Peninsula in Southeast Asia.  Vietnam is bordered by China, Laos, Cambodia, and Malaysia and is known for its beautiful landscapes, winding rivers, and stunning shorelines.  Despite the country’s long and complicated history, Vietnam has managed to bounce back since the end of the war in 1975 to become one of the world’s major economies.  The country also continues to be one of the five remaining one-party socialist states that has officially adopted communism.

Vietnam is a country famous for its beautiful landscapes.  From the green, mountainous regions in the north to the tropical lowlands further south, the geography of Vietnam leaves one breathless.  The northern part of the country is well-known for its lush green mountains and beautiful rice terraces.  Moving south towards Central Vietnam, we pass the lush area surrounding the Red River Delta and move into the Annam Highlands.  In the south, the low-level land becomes more fertile around the Mekong Delta and the beautiful Vietnamese coast; featuring dense jungled, more swamplike areas.

With an overall population of over 90 million people, Vietnam is home to many.  The government recognizes 54 different ethnic groups, the largest being the ethnic Vietnamese people who make up 86% of the country’s population.  Other large ethnic groups include the Khmer Krom of the Mekong Delta, the ethnic Chinese, the Degar people of the mountains, the Cham, the Hmong, and the Tai people among many others.

Vietnam is considered to be one of the least religious countries in the world with only 24 million people identifying with an organized religion.  Commonly practiced religions in Vietnam include the Vietnamese Folk Religion (heavily influenced by Confucianism and Taoism), Buddhism, Catholicism, as well as a handful of other religions.

Vietnam is one of the only functioning single-party socialist republics in the world. The President of the country controls the state while the Prime Minister controls the government.  The country’s one-party system is led by the Communist Party of Vietnam.

In recent decades, Vietnam’s economy has experienced rapid growth largely due to a shift in the 1980s from a centralized economy to a mixed economy.  As a result of this growth, the economy of Vietnam has entered a period of integration into the global economy.  Vietnam relies heavily on foreign investment and agricultural exportation to sustain their thriving economy.  The local currency is Vietnamese Dong.

The official language of Vietnam (Vietnamese) is similar to that of Cambodia and can be difficult for foreigners to master.  However, it is still much appreciated when foreigners make an effort to learn and speak the language.  Confucianism has greatly impacted the culture of Vietnam and especially the way that people interact with and treat each other.  Confucius thoroughly described the roles of different people in society and, as a result, there is a different sense of obligation depending different relationships between Vietnamese people.  Duty, loyalty, filial piety and respect towards elders are important values in Vietnam.  While traveling in Vietnam, avoid public displays of affection, avoid other people’s heads, pointing is considered to be rude and it is better to gesture with the hand, do not cross your arms or stand with your hands on your hips, and dress conservatively (shorts and sleeveless shirts are generally only worn in coastal areas).

The climate and landscape of Vietnam vary greatly from region to region. Generally speaking, the dry season extends from November to April.  However, due to the path of the monsoon winds, much of the country receives rainfall year round.  The temperature in the southern plains is usually higher than in the mountainous north where the temperature vary greatly depending on the time of year (5 °C [41.0 °F] in December and January to 37 °C [98.6 °F] in July and August).

Rice and noodles are important staples when it comes to Vietnamese cuisine.  Rice is often served with a vegetable, fish, or meat dish.  Typical Vietnamese flavors include shallots, coriander, lemongrass, ginger, saffron, mint, anise, coconut and nuoc mam (a fermented fish sauce).  The food does not tend to be very spicy, however, chilli paste and fresh chiles are often served on the side.  Two of the most common and popular dishes in Vietnam are spring rolls and Pho (a noodle soup flavored with ginger, coriander, and lime usually containing spring onions and beef or pork).  There are not many traditional Vietnamese desserts, but ice cream can be found in most restaurants and there are plenty of french bakeries lining the streets of Vietnam’s cities.  Tea is common in Vietnam and usually considered as social drink to share with friends.  The famous Vietnamese coffee is served in a small quantity with a dollop of condensed milk, but don’t be disappointed, the coffee is strong and will give you the boost you need!  Drinking alcohol is widely accepted in Vietnam as a social activity and alcoholic beverages can be found in most restaurants and convenient stores.