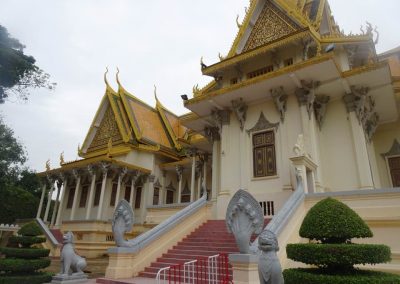 Activities: Check into the hotel.

Itinerary: On the first day guests will arrive in Bangkok and check into their hotel.

Itinerary: After breakfast, a personal guide will meet the guests for a tailor-made tour of the amazing city of Bangkok. Transfer by private vehicle and tour through the different historical and cultural aspects of the city; from bartering in the markets to learning about the expansive history of Thailand to tasting local food. You visit include the national Museum, Royal Palace and Old quarter of Bangkok. The guide will give you the orientation of each site and city.

Itinerary: On the third day, guests will head out of the city center to the Mae Klong River where locals sell their wares at the famous floating markets. The tour will take you along the river in a long-tail boat where guests can shop to their hearts’ content! Afterwards, the tour will take you on an easy 30km, child-friendly bike ride through the gorgeous surroundings.

Itinerary: Leaving Bangkok early in the morning, guests will take a short flight north to Chiang Mai. For the more adventurous families, it is possible to take an overnight 4 berth sleeper train to Chiang Mai instead of flying.

Upon arrival, families will be met by a tour guide who will take them on a tour of this slower-paced, relaxed city.

Itinerary: Today the guests travel to Doi Inthanon National Park for some early morning wildlife viewing and bird watching. Doin Inthanon National Park is home to the largest number of bird species in all of Thailand! Afterwards, guests will visit Doi Suthep, a Buddhist temple that is a landmark of Chiang Mai, followed by a visit to nearby waterfalls.
In the evening, all guests will enjoy a Khantok (northern-style) dinner with a fantastic Thai dance show.

The other option for guests: Enjoying Thai food? Today guests will learn how to cook various Thai specialties at a local cooking school. Prior to cooking, chefs will take families to experience the bustling markets to collect the different ingredients needed for their dishes.

Itinerary: Guests will visit a rescue center for elephants in a beautiful, forested valley.

In the afternoon ( If times allows) , guests will take a trishaw ride and explore the old city of Chiang Mai before driving up to Doi Suthep, overlooking the city below. Here, guests will enjoy the incredible view as the sun sets and the monks chant peacefully around them. In the evening, guests will have a chance to explore the vibrant life of the night markets.

Meals: Dinner
Itinerary: After breakfast the guests are free until time to transfer to the airport for flight to Luang Prabang.

Welcome to Laos! On the first afternoon, guests will arrive in Luang Prabang and take a tour of the city that is also a UNESCO World Heritage Center. Often considered the most beautiful city in Southeast Asia, Luang Prabang is located at the junction of the Mekong and the Nam Khan Rivers. During the tour, guests will visit the famous Wat Visunalat and Wat Aham. After, the tour will take guests up the Phousi Mountain where they will be in awe of the beautiful panoramic view of the city and its surroundings. Afterwards, guests will be free to wander through the night market before settling in at their hotel for the night.

Itinerary: On the second day of the tour guests will pay a visit to the magnificent Wat Xieng Thong Temple on the banks of the Mekong River. Guests will also visit informative and historical sites like the former Royal Palace and the National Museum. These activities will be followed by a boat trip up the Mekong River to the limestone Pak Ou cave where they will find different images of the Buddha all around them. During this outing, the tour will also visit two small villages called Ban Muangkeo and Ban Xang Khong, the first is known for making traditional Lao rice whisky and the second is known for its wood paper, silk weavings, and natural dyes. After this excursion, guests will be free to explore Luang Prabang some more and enjoy a traditional Lao dinner at one of the local eateries.

Itinerary: Today guests will choose between three different excursions.
The first option is to visit a weaving village, followed by a visit to the Elephant Park Project where guests have a chance to interact with these amazing and friendly creatures and learn about why the elephant population in Laos is dwindling and how the people of Laos are trying to help the elephants and a visit to the Nam Khan River and the Tad Sae waterfall.
The second option is a full day bicycle tour around Luang Prabang to explore the old Unesco World Heritage Site including pagoda, market and town.
The third option is a full day trek (varying levels of difficulty) to visit the ethnic villages around Luang Prabang. Guests will also catch a glimpse into the lifestyle of the people that live in the countryside of Laos.

Itinerary: After breakfast on the fourth day, guests will travel over the mountains to Xieng Khouang. Historically, this province is known for the heavy bombings that occurred there during the Indochina War and for the Plain of Jars. The journey is approximately 8 hours, along the way the tour will stop at local villages for an authentic glimpse into the lives of rural families and ethnic minorities. The day’s journey will end in Phonsavanh, the capital of this province.

Itinerary: After breakfast, the tour will take guests to visit the Plain of Jars 1 and 2. On this excursion, guests will have the chance to learn about the history of the stone Jars which are 2000 years old and scattered throughout the countryside of this province. After this, the tour will visit Muang Khoun, the old capital of Xieng Khouang to see some ruins from the war.

Itinerary: Today, guests will visit a local market in the morning and later travel to the Xieng Khouang airport for a quick journey to Vientiane, the capital of Laos. Upon arrival, guests will take a tour of the city. The tour will include visits to the religious museums of Wat Sisaket (the oldest surviving temple from the Siamese War) and the most sacred monument in Laos, Pha That Luang.

Itinerary: Today guests have a choice! Choices will include: a visit to the Buddha park just outside of Vientiane or the Vientiane Orchid Tour. The Buddha Park visit is only a half-day excursion and leaves the afternoon free for guests to do as they please. This visit will give guests a chance to view some Buddhist art and sculptures. The Orchid Tour come highly recommended and will give guests the chance to explore the natural surroundings of Vientiane and learn about the natural habitats of the the wild orchids.

Activities: Travel to next destination

Itinerary : All day explore the world heritage site of Angkor Wat, be inspired by the magnificent Khmer civilization through some of the most fantastic architectural history that’s on offer . Marvel at its seemingly limitless magnificent temples. Bayon and multi-faced temple, Baphoun and Elephant Terrace are just some of the highlights, Expert local guides will regale you with the history and little known facts.

Itinerary: Journey to Ta Prohm temple, a UNESCO World Heritage Site. After, wander around the Angkor National Museum, home to golden-era Khmer Kingdom artifacts. With expert knowledge and local expertise access two less-visited areas — Banteay Srei, also known as the “Citadel of Women,” and Banteay Samre, one of the most complete temple complexes of Angkor.

In the afternoon amount a helicopter in order to feast your eyes on the magnificent views over Angkor Wat Park.

Itinerary : After breakfast and checkout, take a luxury private car to Phnom Penh, the capital of Cambodia, once known as the “Pearl of Asia,”.It was considered one of the loveliest French-built cities in Indochina in the 1920s, the significant global and domestic tourist destinations for Cambodia. Founded in 1434, the city is noted for its beautiful and historical architecture and attractions.

Afternoon explore the capital in city attraction Wat Phnom. Located in the heart of Phnom Penh, Wat Phnom Pehn was an old capita, erected just on the peak of this man made hill by. It is a sacred religious site of Cambodians in Phnom Penh found by lady Pen after the fall of Angkor. Move on to a tour of The Royal Palace and Silva pagoda. It serves as the residence of the King, a venue for court ceremony and as a symbol of the Kingdom. Silva pagoda was named for its silver tiled floor, it houses a collection of priceless Buddhist and historical objects including the ‘Emerald Buddha.’ And, unlike most pagodas, no monks live at the pagoda. National Museum of Khmer Arts is a beauty to behold; it also houses the world’s foremost collection of ancient Khmer archaeological, religious and artistic artifacts.

In the afternoon, visit the Sovann Phum office for a taste of traditional Khmer culture.

Later afternoon, take pleasure in a champagne boat trip on the river as the sun sets over the capital.

Transfer to the airport for flight to….

Sadly leave but every one had such time in Southeast Asia and great experience with us!