Experience a local way of life! 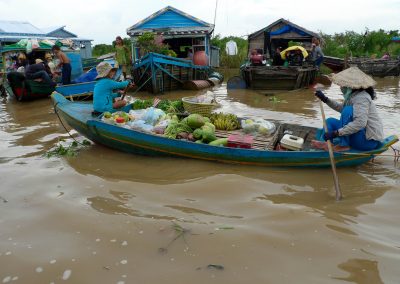 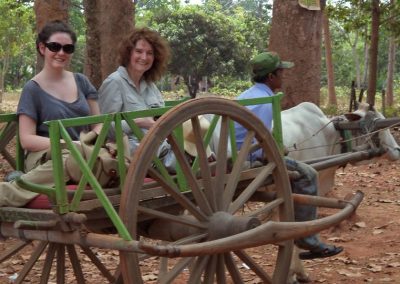 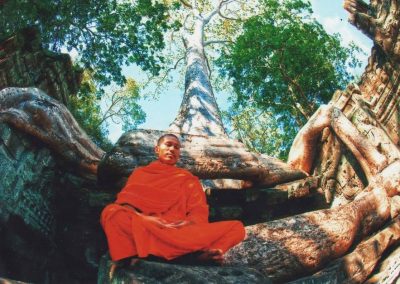 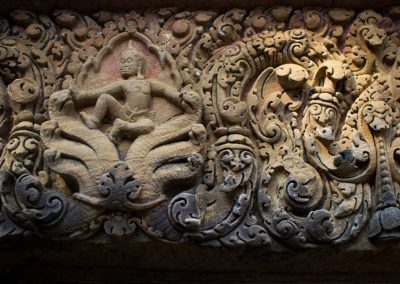 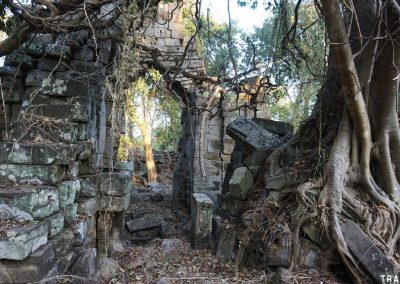 Descriptions: Get a taste of rural Cambodian life.
An overnight stay with local family, learn to speak a bit of Khmer language, and cook and eat with them.
Have fun with different activities and community project services, ( seasonal). Travel by ox cart to a remote village, and be blessed in a traditional Buddhist ceremony.
Explore Tonle Sap Lake and the residents’ unique lifestyle. Go off the beaten track and see a less visited temple.

Day 1: Transfer to the Village for Home stay

Itinerary: This morning the guests are transferred to the village for their home stay with a local family.
We learn about life in a typical village. Meet friendly locals and discover traditional village customs and cultures.

We start with an early morning visit to Krabey Riel village, which still has its old original life style where the villagers wear traditional clothes. We wonder around and observe the cultural activities and handcrafts of the village.
We take an ox cart ride, a traditional countryside method of transporting people and goods. The 30 minute journey passes through the village on the way to the local market. Explore colorful displays of vegetables, herbs and other locally-grown produce and mingle with shoppers who come every morning to buy the fresh ingredients.
Continue on foot through the village. This provides ample opportunities to stop and chat with locals and to observe their activities.
Depending on the time of year, they may be planting rice, weaving thatch coverings for their roofs and harvesting vegetables etc. For a truly immersive experience, lend a hand and join the locals in these activities!

Activities: See monks, meditate and then a boat trip on Tonle Sap Lake to see the floating village
Meals: breakfast, lunch and dinner

Itinerary: Before leaving the village in the early morning we partake in a special Buddhist tradition; meditation. Local monks will impart wishes of good luck and success in the solemn, age-old ceremony. Back home and have breakfast with your host. Then it is time to say farewell to the family.
We continue the tour to Tonle Sap Lake. Upon reaching the lake’s shores we travel by boat to Me Chrey floating village. This village is further away than most and receives fewer tourists.
See the locals with traditional activities of fishing, farming and house moving. Some tropical birds can be seen on the lake as well.
Stop in a family house for lunch and dine inside the floating home. Gain a better understanding of life on the water and enjoy views of the lake from a different perspective.
Then it is time to say farewell to the family and return by boat and car to Siem Reap. (L)
Back to Siem Reap for overnight stay at Hotel

Activities: Off the Beaten Track Tour
Meals: Breakfast and lunch

Itinerary: Breakfast in hotel. Guests travel northeast, off the beaten track, to explore the lost civilizations of Beng Mealea and Kor Ker.
The temple of Benag Mealea in overgrown jungle was selected by National Geographic for film and photography.
Continue to Koh Ker which was not rediscovered until the 1990’s.
The ruins of Prasat Bey, Prasat Thom, Prasat Neang Khmao, the Linga and Elephant temples are still surrounded by jungle, tropical forest, and none of them have been restored.
Lunch and dinner on site

Itinerary: Breakfast then travel to Preah Vihea temple. This is the most spectacular setting of all the temples built on the Dangrek mountains with breath-taking views. It’s the same age as the temples of Angkor.
Preah Vihear is unusual among Khmer temples in being constructed along a long north-south axis, rather than orientation toward the east. The temple was listed as a UNESCO World Heritage Site in 2008.

Lunch, then travel to Anlong Veng still in the area of the Dângrêk Mountains, in the far north of Cambodia.
It is close to the international border crossing with Thailand.
Anlong Veng is best known for two historical reasons. It was the last stronghold of the Khmer Rouge in 1998 and the final resting place of Pol Pot.
Over 3,000 people were allegedly killed here by the Khmer Rouge for having become “corrupted” as late as 1993 and 1997.
Travelers stop for a short tour around the museum of Ta Mok, the former Khmer Rouge leader, and the tomb of Pol Pot.

Resume the trip to the massive temple of Banteay Chhmar, along with its shrines and reservoir (baray).
It is one of the most important and least understood archaeological complexes from Cambodia’s Angkor period.
It resembles Angkor Thom and other structures attributed to Jayavarman VII with the enigmatic face-towers.
Its outer gallery is carved with bas-reliefs depicting military engagements and daily life scenes very similar to the well-known ones in the Bayon.
Travel back to Siem Reap for overnight stay.

Activities: Transfer out to the airport
Meals: breakfast

Itinerary: After breakfast at your hotel guests will have some free time until the private transfer to the airport….…
We sadly say goodbye to the lovely people and hopefully will see them again next time.
All very best and have a safe journey.