The Trails of the Khmer Rouge 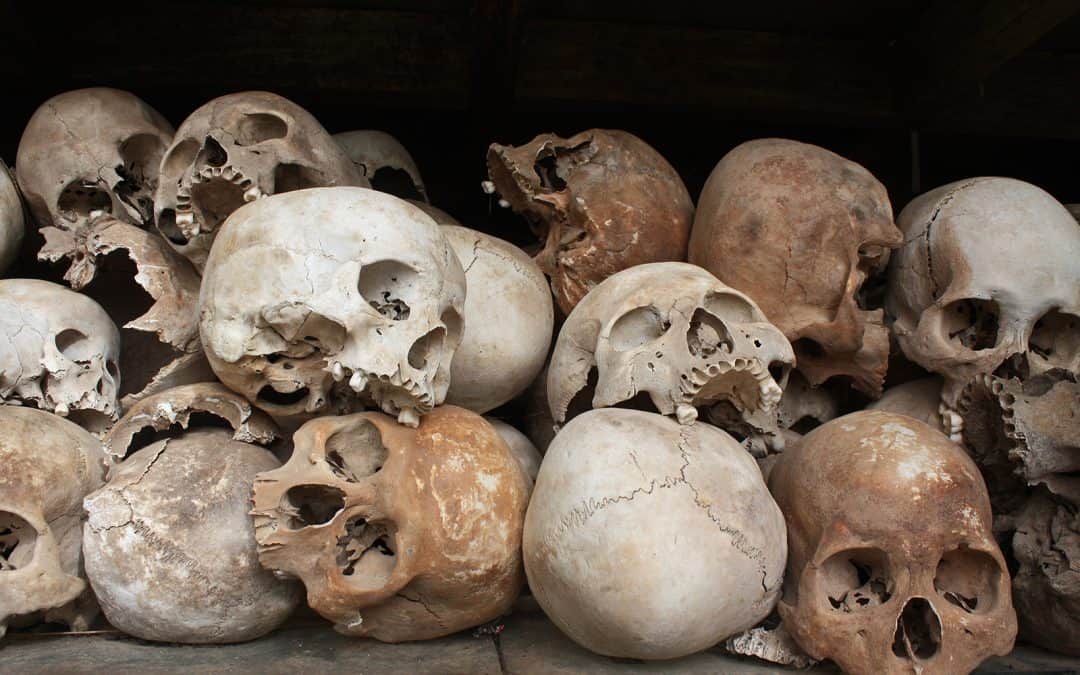 The Khmer Rouge were the ruthless followers of the Pol Pot who controlled Cambodia from 1975 to 1979. They were responsible for the deaths of more than 2 million Khmer people and then after the mass genocide they led Cambodia into a brutal civil war which lasted for nearly the next two centuries.

Anlong Veng is the final resting place of the notorious Pol Pot. The country he brutally ripped apart has left very little recognition other than a simple grave with a tin roof. The house he lived in has been left to rot and there is vegetation growing all over it. There is nothing there to celebrate who he is except a few small structures.

The isolated Anlong Veng was strategically chosen by the Khmer Rouge for its remote location. Here invading troops first found one of the infamous killing fields. The area was protected by the Dangrek mountains and gave the Khmer Rouge warning when the enemy was approaching.

We offer a great Khmer Rouge Trails tour which stops in Anlong Veng where you can visit the tomb of Pol Pot, a former Khmer Rouge military base court which now serve as a museum. During our time in the area, we can stop to speak to local survivors. We will supply a qualified and experienced tour guide who will provide a historical lecture about the Pol Pot regime and give their own personal accounts of what happened at that time.

Koh Ker is a temple which was once the capital city of the Khmer Empire. Nowadays, the temple is accessible to tourists, but you must stay on the roads and paths. There are signs everywhere which remind visitors of Cambodia’s recent past telling people not to enter because of the landmines which are still in the area. Landmines were placed here by Lon Nol’s government, the Khmer Rouge, and the subsequent coalition governments.

This whole area was a stronghold of the Khmer Rouge until the late 1990s when the fighting stopped.

Government forces would push the Khmer Rouge back to Pailin in the dry season only to retreat again in the wet season. The fighting continued for more than 15 years in Battambang and the scars run deep in the city.

On our tour, we’ll also go to see Phnom Sampov in Battambang which was used by the Khmer Rouge to dispose of the dead bodies. The Killing Caves were a site of many atrocities from the era where people were bludgeoned to death and thrown into the caves.

Finally, we’ll visit the capital city where we can visit the killing fields and the infamous jail at S-21. In this jail, thousands of innocent Cambodians were tortured and killed for crimes they were accused of and not necessary charged with. Many former Lon Nol soldiers were killed as were people suspected of working for the CIA. The Khmer Rouge were extremely paranoid and tortured and killed anyone they suspected of wrongdoing.

Cambodia has had to bear the scars of the Khmer Rouge and subsequent civil war. There were many atrocities committed in Cambodia which most people aren’t aware of. You can learn a great deal about the recent hardships of the Cambodian people in the hands of the Khmer Rouge. It’s a harrowing journey, but one which will show you the world through the eyes of a victim of Pol Pot’s murderous regime.